There are 8 main patterns in Nigerian Dwarf goats.  These 8 patterns are expressions of genes at the Agouti locus (Agouti is the main locus controlling the distribution of pigment in goats). Each goat has two Agouti locus genes and each parent gives its offspring one of these genes (one gene from each parent). This allows for an extensive range of colour and pattern combinations.

Following is a description of these eight Agouti locus patterns along with some of the combinations of these patterns and markings often used to describe Nigerian Dwarf appearance.
​BLACK
The gene for black is recessive to all the other genes at the Agouti locus and is common in Nigerian Dwarfs. To produce solid black offspring, both parents must be either black or carry a copy of the black gene. It is impossible to tell if a non-black goat is carrying a gene for black just by looking at it. But you will know a goat is carrying the black gene if it produces a black kid or if it has a black parent.

​Black combined with any other pattern will be expressed as the pattern and not black due to black being recessive. For example, a goat with both the black and buckskin genes will be a buckskin (carrying black). 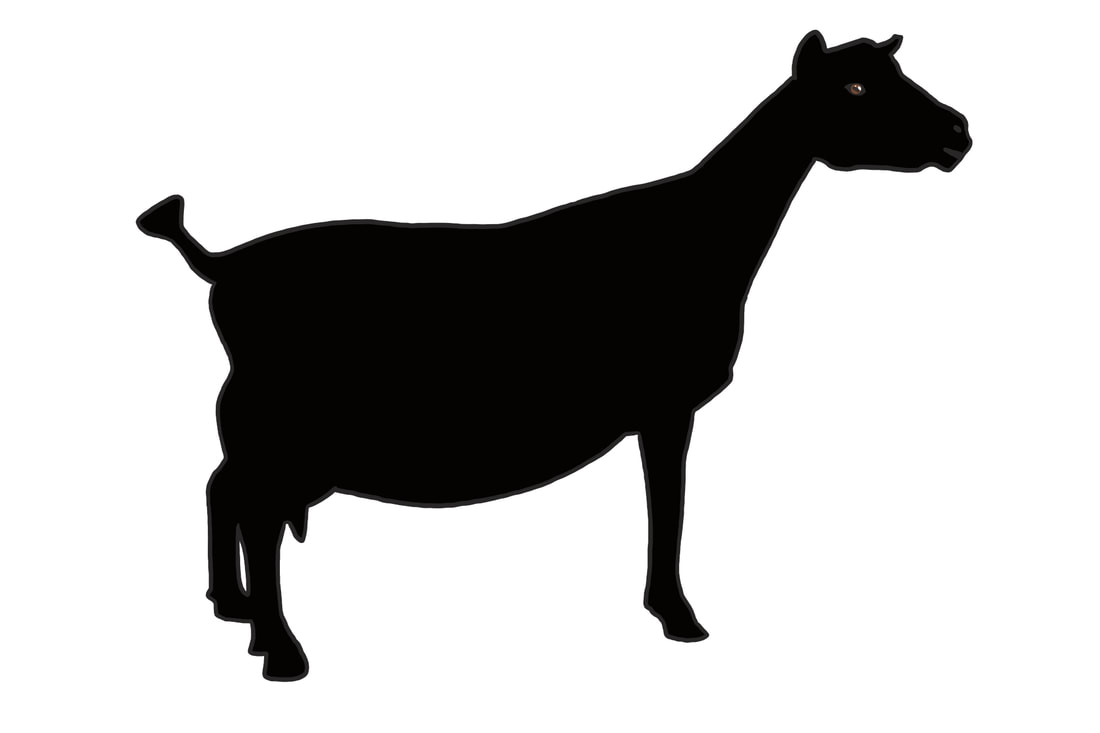 GOLD
Gold is dominant to all the Agouti patterns and can be expressed in various shades ranging from pale cream through tan to deep red. Gold goats are generally of a uniform shade although they sometimes have subtle shading around legs, face, underbelly and dorsal.

Because gold is a dominant gene, gold combined with any other agouti pattern will be gold. Gold is the most dominant of the agouti locus patterns. 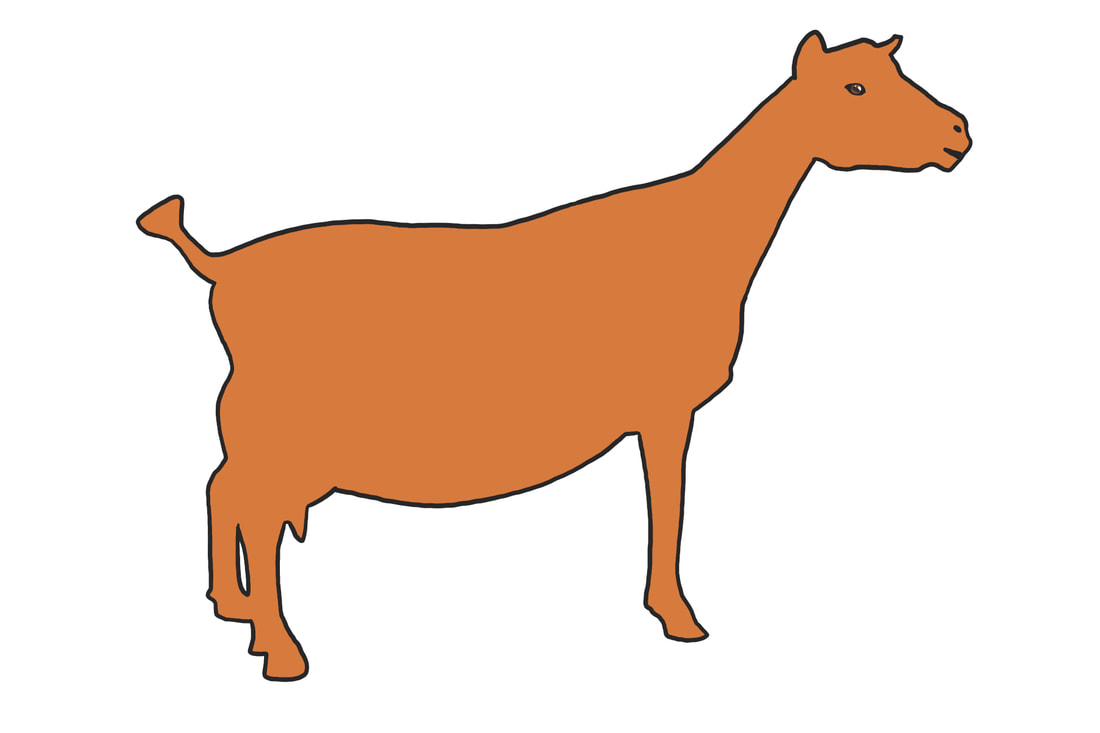 CHAMOISEE
Pronounced ‘sham wah zee’, goats with this pattern are tan with a black underbelly, solid black lower legs, black dorsal and black face stripes. They sometimes have an all-black face. The black markings can be obvious or subtle and the body colour can range from light tan to dark brown.

​Chamoise is a term used to describe a buck or wether with this pattern, while traditionally, Chamoisee refers to a doe. 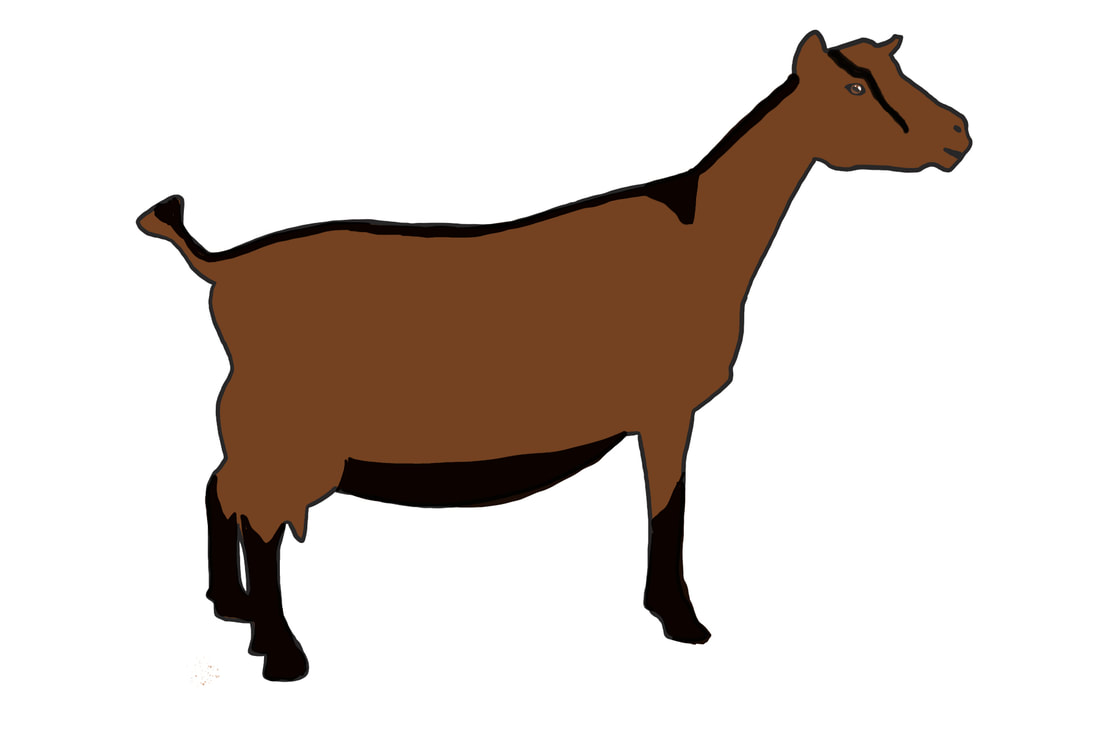 BUCKSKIN
A goat described as buckskin is usually tan in colour with a black cape extending down the neck through to the withers and down to the front knees. Their faces are black with tan stripes, and the top of their tails are also black. There are many variations with the buckskin pattern and the body colour can range from light to dark (cream to dark brown) and the cape can be minimal (just over the shoulders) or extend over the whole rump area. 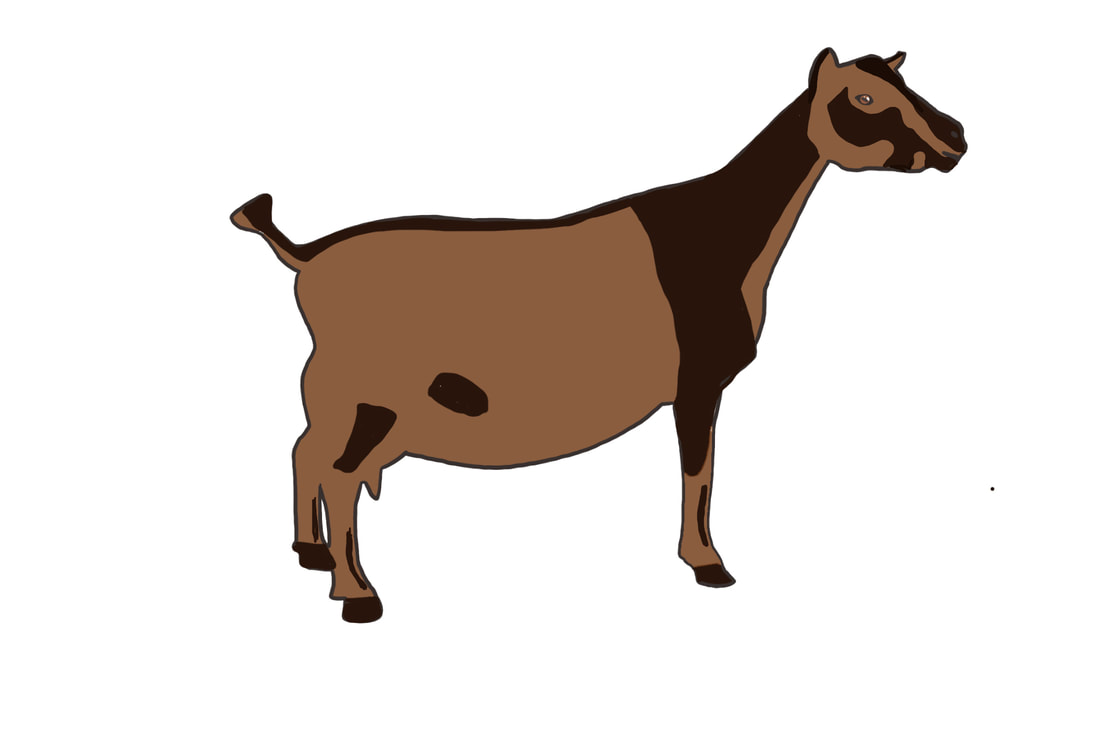 ​SWISS
Swiss marked goats have a black body with tan ears, tan facial stripes and muzzle, legs are tan below the knee and they have a tan under tail. Their hooves are usually white instead of black. The tan markings can range in colour from light to dark. 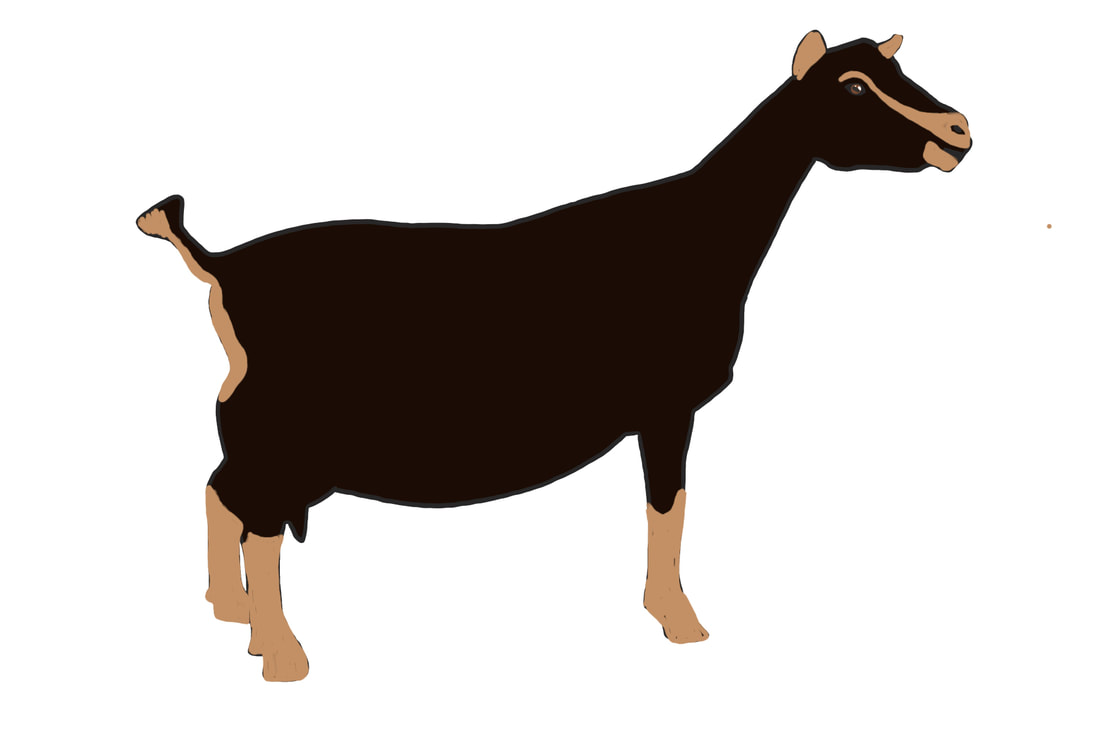 COU CLAIR
The Cou Clair pattern is distinguished by a tan coat with black markings over the rear, rump, and underbelly. They have a black face with a distinctive extra curved stripe along the cheek.  The base colour can range from very light, almost white through to dark brown. Cou Clair translates as ‘clear neck’. The cou clair gene in Australia expresses slightly differently to the version in the US. The US version tends to have tan down the middle of the nose between black stripes.

​The term Cou Blanc is sometimes used to describe the version of cou clair where the tan part of the coat is very pale cream. Cou Blanc translates to ‘white neck’. 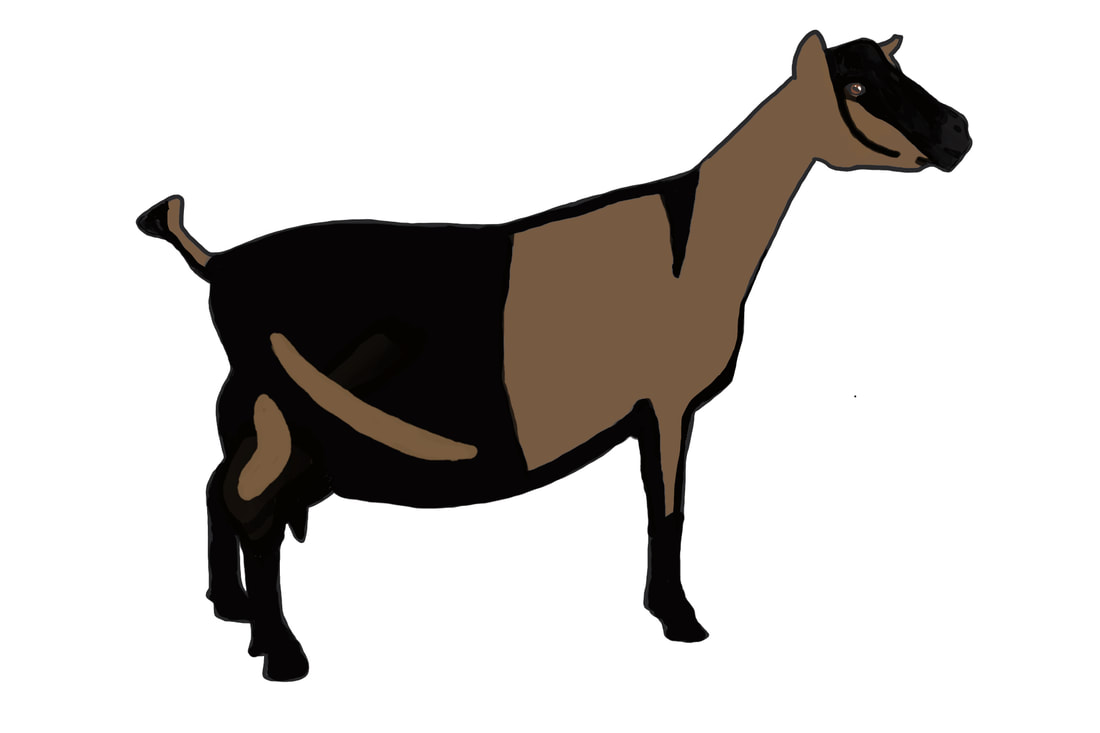 ​SUNDGAU
Pronounced ‘sund gow’, this pattern is similar to Swiss markings though distinguished by the tan underbelly and black leg stripes, also the sundgau does not have a tan muzzle. Sundgau goats have a black body with tan facial stripes, tan underbelly. The legs are tan below the knee with black barring on the front. The tan markings can range from pale cream to dark brown. 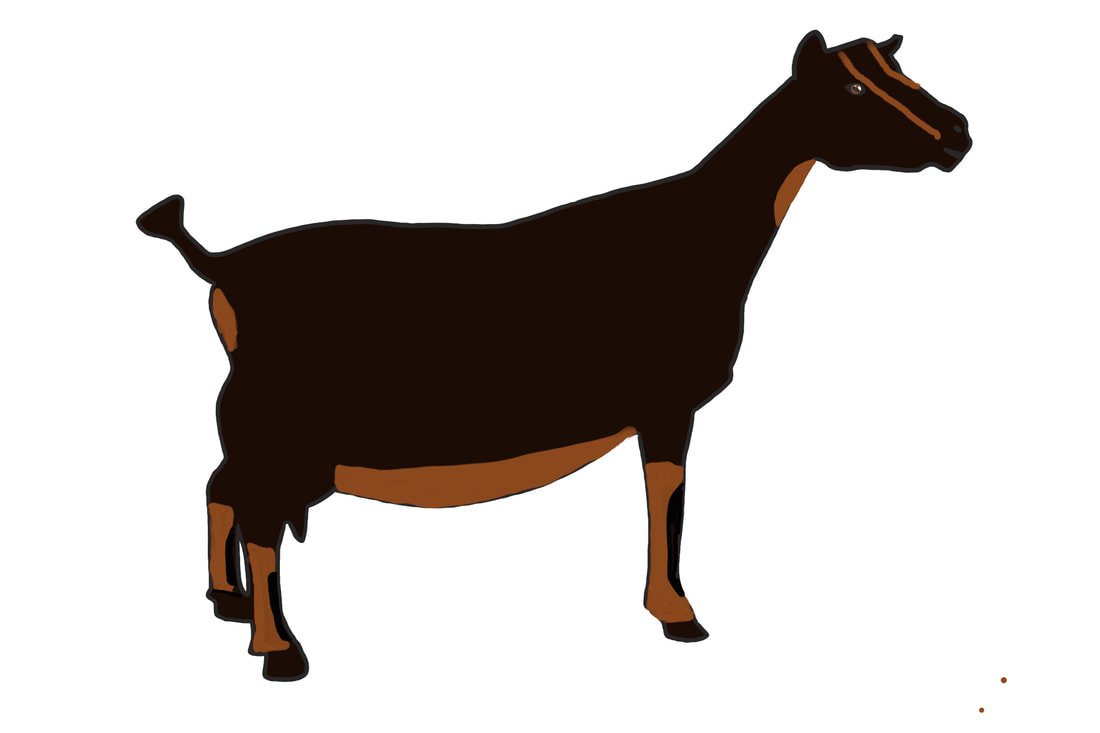 ​BEZOAR
The bezoar pattern is distinguished by a tan body with lighter coloured facial stripes, underbelly and legs. They often have a dark face, black leg stripes, a dark dorsal stripe and a dark shoulder marking. This pattern is so similar to the combination pattern of buckskin and chamoisee that it is very difficult to distinguish between the two. 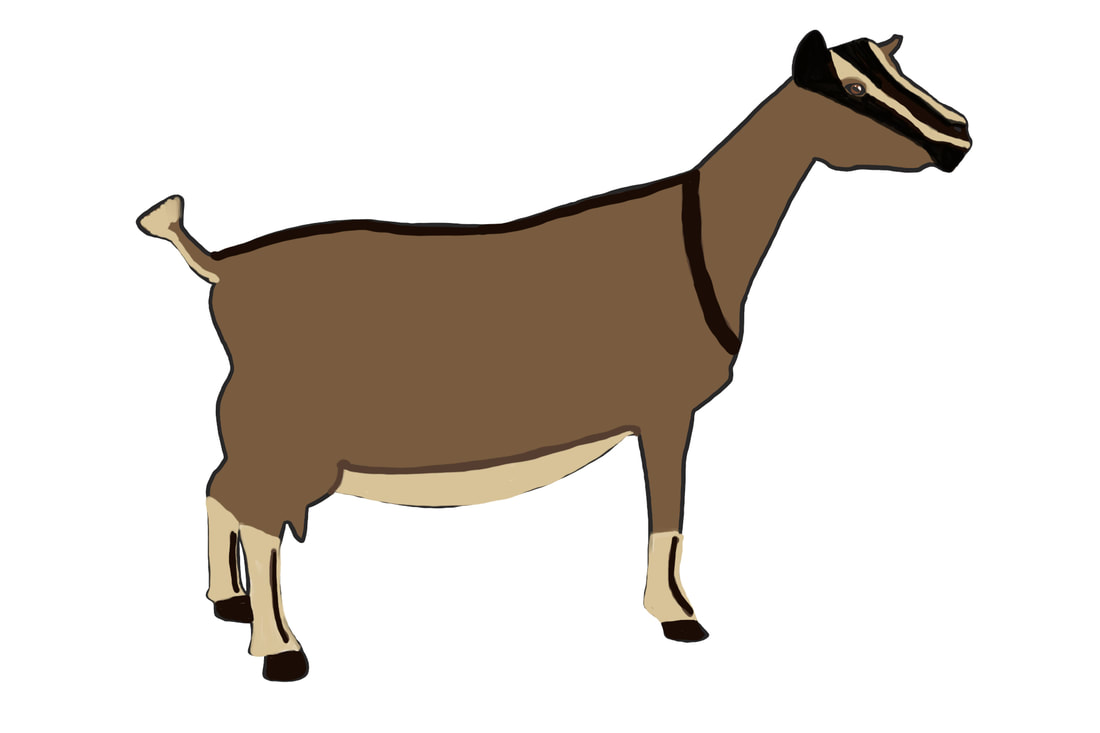 Both chamoisee and bezoar can almost conceal cou clair when either pattern occurs in combination with cou clair, but usually tell-tale parts of the cou clair cheek stripe are visible in these combinations.

The blending of patterns can make it difficult to determine which patterns are present.  For example, Cou clair/swiss would look like a cou clair with added tan swiss facial stripes and muzzle and tan below the knee. The rump and other cou clair markings would be black. 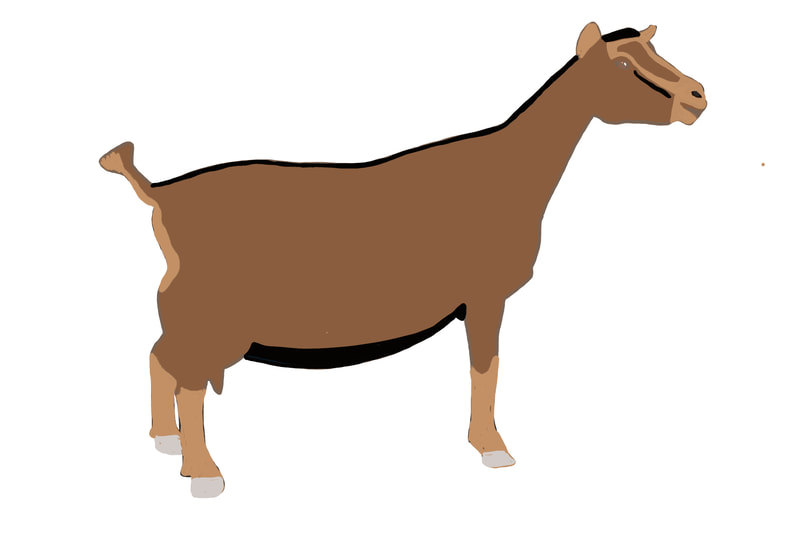 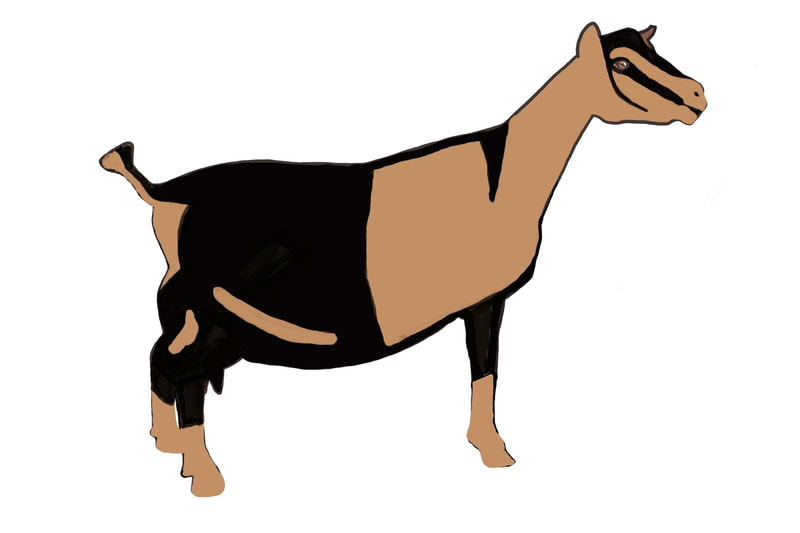 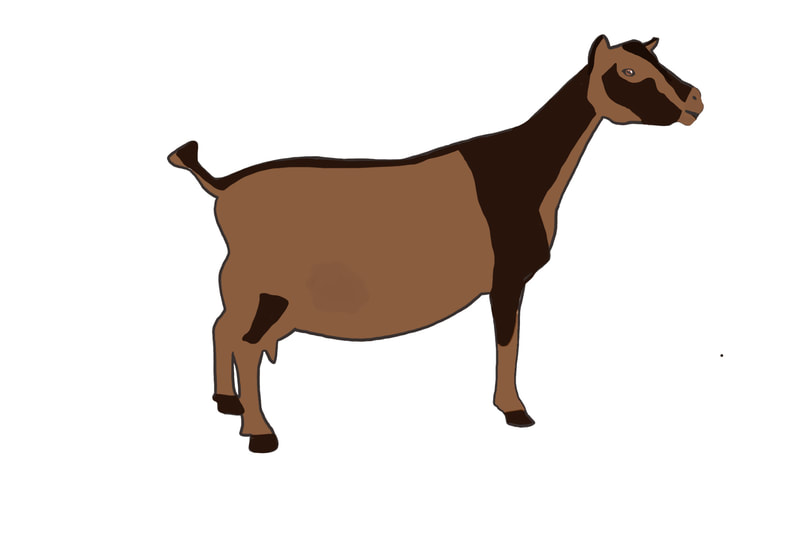 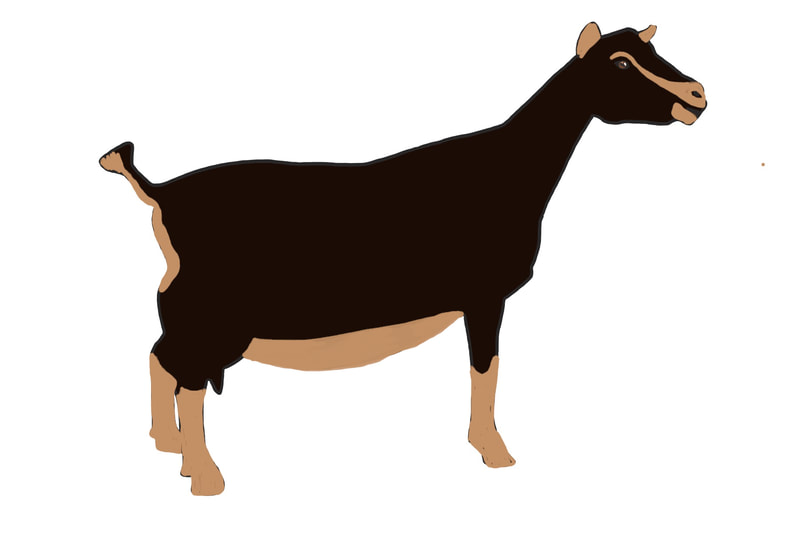 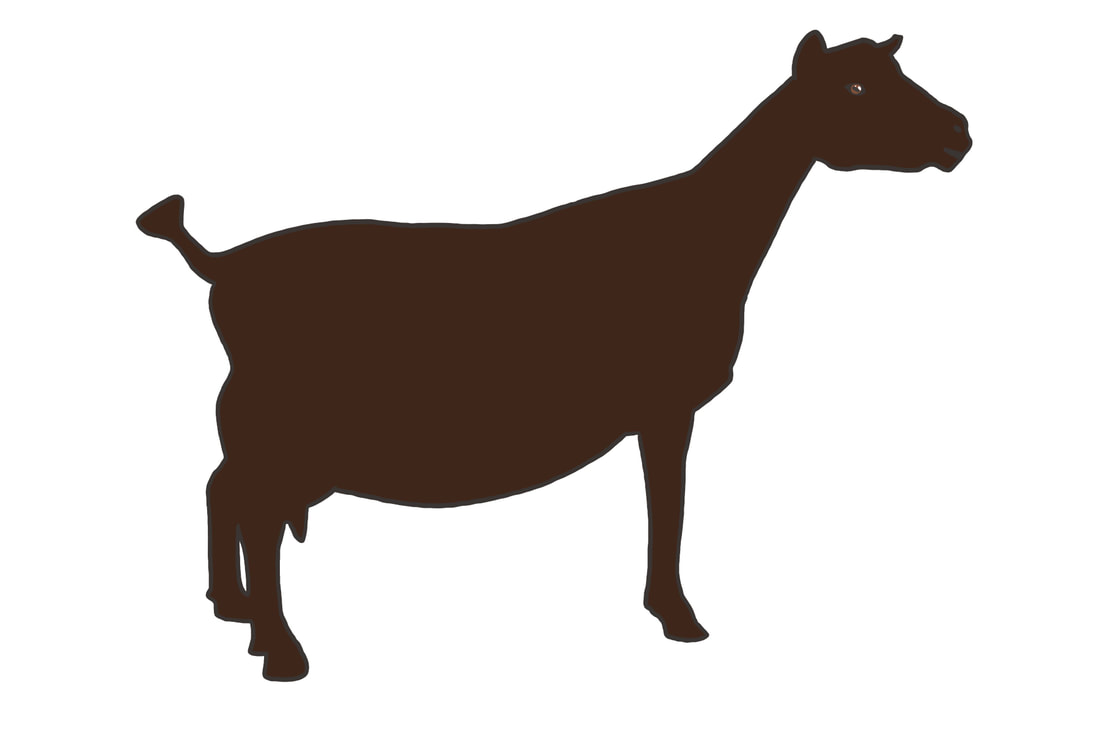 ​SILVER
Silver is a dominant modifier that works in a similar way to chocolate except that it makes a black goat uniformly silver. The difference between a silver and a light black roan is that a roan will have black face and lower legs, whereas a silver does not.  Unlike chocolate, silver also affects the tan part of an agouti locus pattern, having a roaning effect on the tan areas as well. 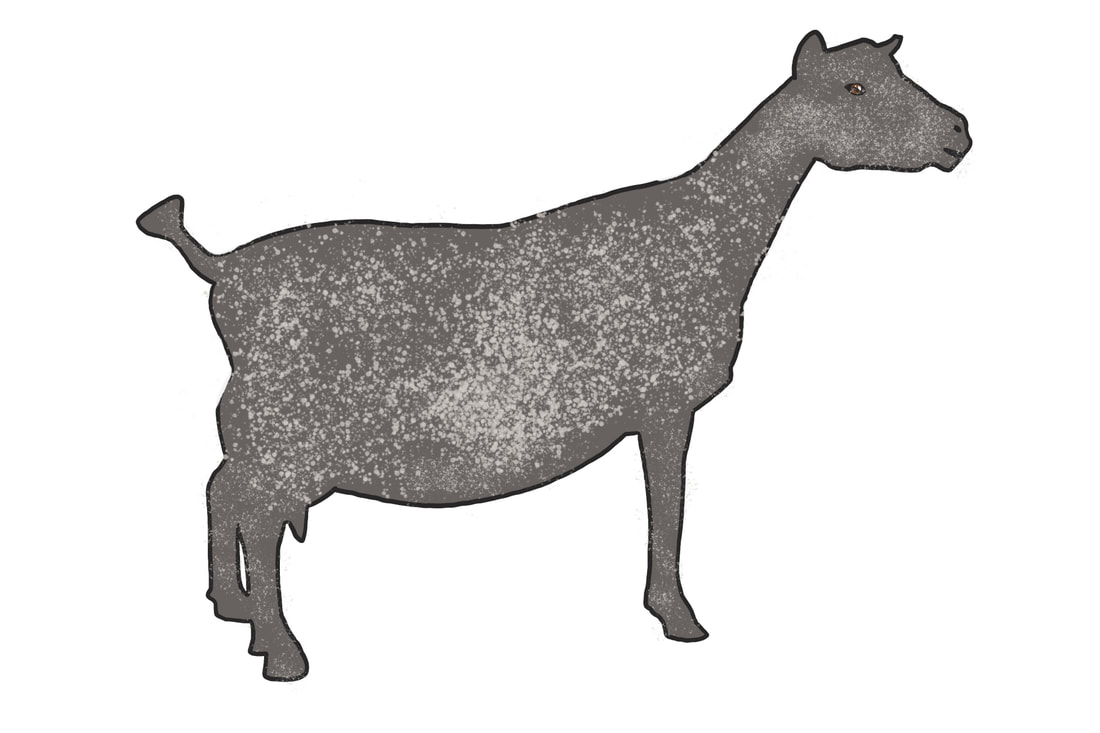 ​RECESSIVE RED
Recessive red is a rare gene that when inherited from both parents will completely hide the agouti pattern and make the goat a rich gold colour. You may have recessive red if you get a kid that appears to be gold without either parent being gold (although a DNA test might reveal that a gold buck has been unexpectedly involved and that the kid is not recessive red after all).
​OTHER  MARKINGS COMMON TO NIGERIAN DWARF GOATS
These are inherited separately from the agouti locus and can be thought of as covering parts of the agouti locus patterns.
MOONSPOTS OR MOTTLE
Moonspots, also described as mottle, are rounded asymmetrical spots randomly placed on the pigmented areas of the coat. Mottling can be so extensive as to produce a goat almost completely grey. Moonspots appear in various colours, from light cream to dark brown and often fade as the goat ages. Sometimes moonspots are not apparent at birth, but start to become noticeable around 3 months of age. It is possible for spots to appear in more than one colour but will never be true white or true black. It is usually possible to identify the underlying agouti pattern in a moonspotted goat. 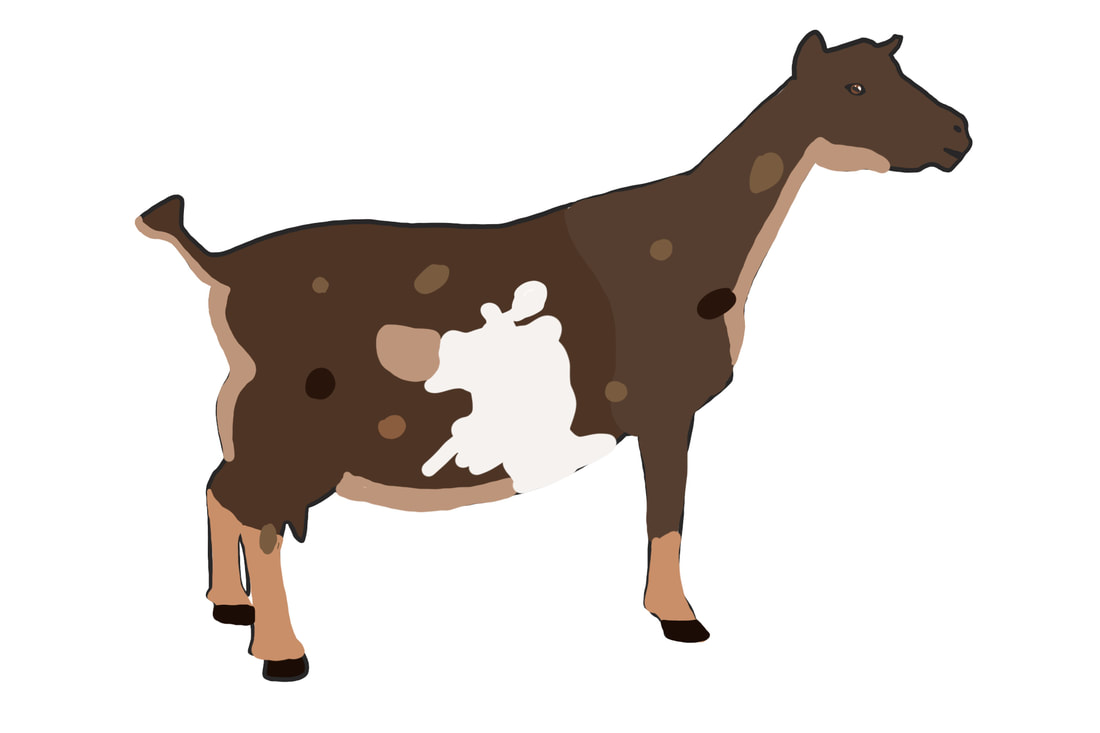 WHITE POLL
White Poll refers to a white round patch on the goat’s forehead (not to be confused with polled which refers to a goat born without horns). A white poll is often seen in conjunction with a white tail tip. When this white area extends down to towards the mouth it is referred to as a blaze. A white poll is common in Nigerian Dwarf goats and is thought to be dominant. 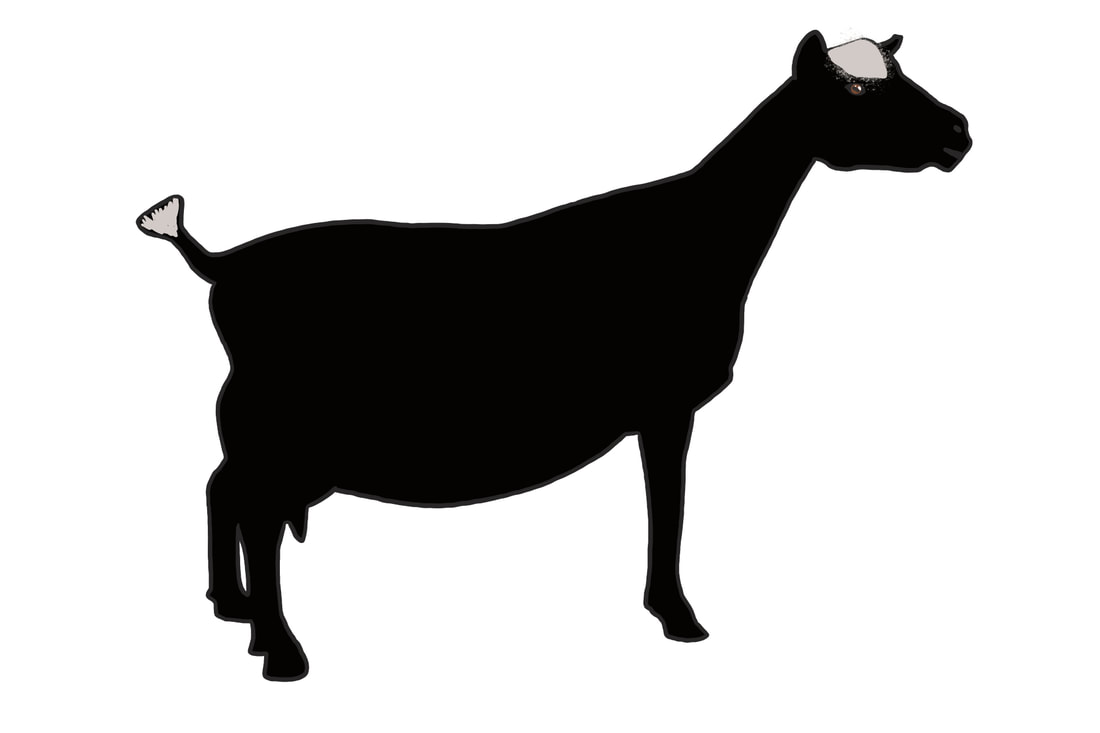 WHITE OVERLAY
White overlay is a term used to reference white areas and usually refers to large amounts of white – the amount of white can be minimal or extensive. White markings conceal a goat’s base pattern so when determining pattern it is helpful to ignore white areas. 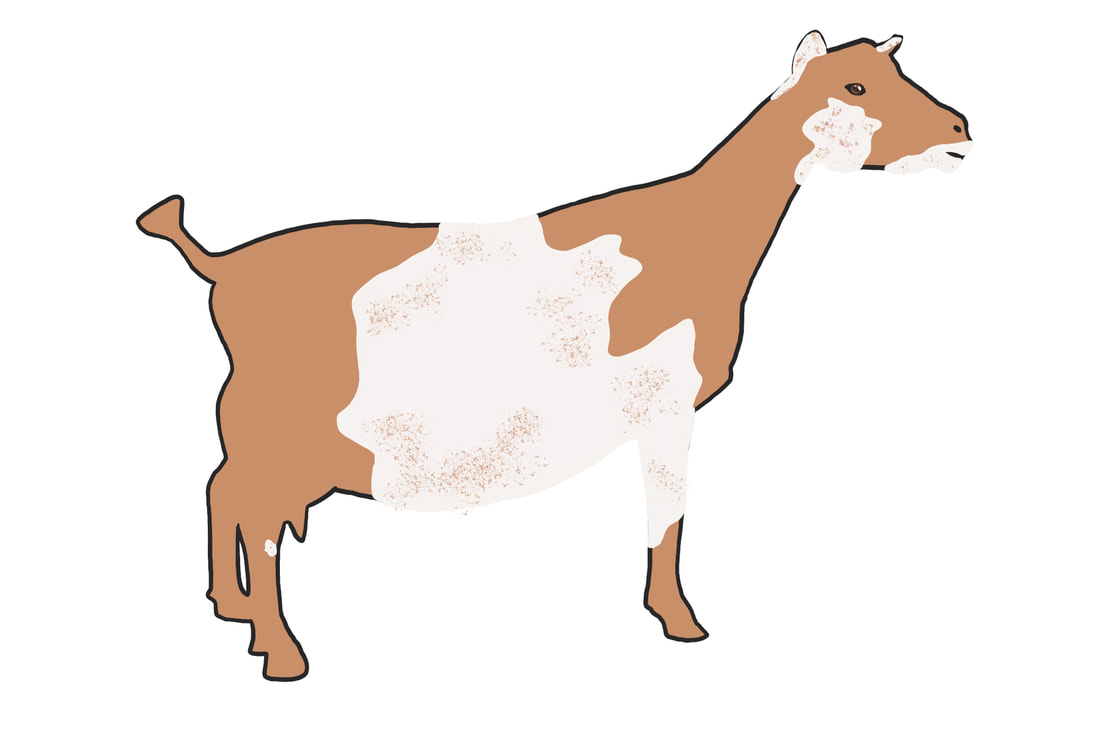 FROSTING
Frosting refers to a white fleck pattern around nose and mouth, ears, eyes and the underside of the tail. It is common in Nigerian Dwarf goats and is dominant. 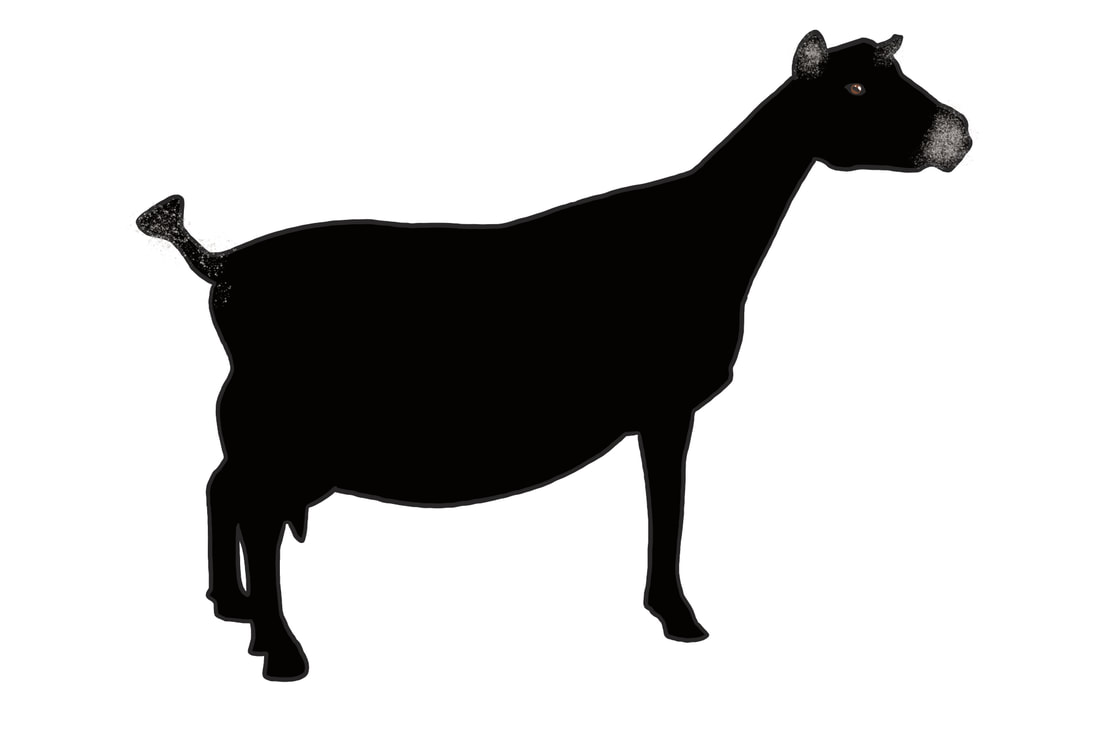 ROAN
Roan is a pattern expressed by an even distribution of white hairs mixed with the pigmented base coat. The roan patterning can extend over the most of the body or be localised to a particular area. In roans, usually, the face and lower legs will have minimal roaning or none at all. Roaning can modify the appearance of all agouti patterns.
This document, including the graphics, research and information compiled herein, was prepared for NDGSA (Nigerian Dwarf Goat Society of Australia) and cannot be reproduced or distributed without permission from the NDGSA.

For in depth information about goat colour genetics:
www.nigeriandwarfcolors.com/coat-patterns
www.hasitall.com/genetics/
Australian All Breeds of Miniature Goat and Sheep Society Inc.